H3N2, Eggs and the Flu Vaccine 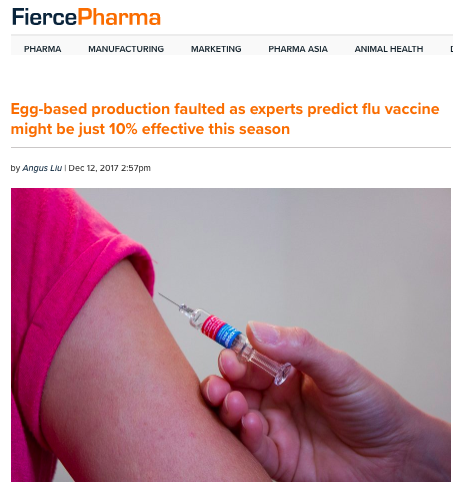 The reason the 2017-18 seasons flu season has been so deadly is largely because the flu vaccine is ineffective against the currently circulating influenza type A antigen H3N2. Scientists and flu vaccine makers knew that H3N2 was coming and prepared the vaccine to fight it, but egg based vaccine technology is a poor technology against H3N2, especially when compared to other flu viruses such as influenza B.

In 2016-17, the flu vaccine effectiveness at preventing illness was estimated to be just 34% against A (H3N2) and 56% against influenza B viruses (1). While the final stats are not out yet, the overall 2017-18 flu vaccine efficacy is likely to be less than last year and especially worse against H3N2.

In 2016, H3N2 mutated and most people receiving the egg-grown vaccine did not have immunity against H3N2 viruses during the 2016-17 flu season in North America (2). There is no reason to expect any difference this year since again, the flu vaccine is produced by growing the virus on an egg culture.

According to pharma industry news journal Fierce Pharma, the industry is predicting only 10% efficacy against H3N2 in this years’ flu shot (3) and they are placing the blame on the industries practice of using egg based cultures as a viral growth medium.

Translation: The virus grown on eggs that is deactivated and injected into people does not cause the proper immune response to fight off the circulating H3N2 strain this year. While some of the poor efficacy can be due to ‘antigenic drift’ of mutating viral strains, the industry and CDC understands egg technology producing dissimilar H3N2 viral antigens is the cause of the vaccine sucking this year.

While the pharma industry sees the egg problem one way, naturopathic doctors see a large cause for concern in the egg culture that the flu vaccine is grown on finds its way into vaccines and ultimately egg proteins are injected into the bloodstream. Introduction of egg proteins via injection is not the same as eating eggs. Ingesting egg proteins gives the body a chance to react should there be an allergy to egg, an injection affords no such chance.

As a final word on H3N2, here is a PubMed article showing how a homeopathic influenza virus solution shows promise in fighting H3N2 influenza (4). For now, I encourage everyone to read my blog post on ”Naturopathic Flu Prevention” and take common sense prevention measures.