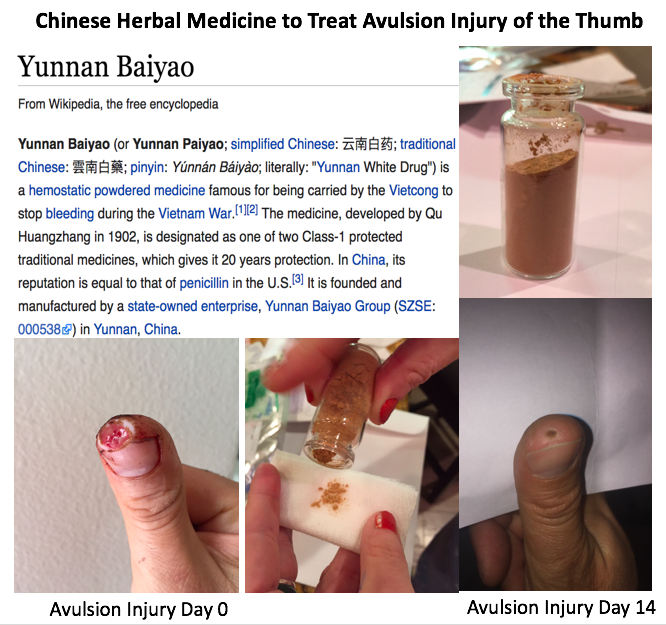 After carrying around a vial of the powdered herbal formula Yunnan Baiyao since 2013, I finally got a chance to use it this month to help a neighbor who sliced off the tip of his thumb in a food processor.
My neighbor came to me wondering whether to go to the hospital or urgent care to treat the now profusely bleeding thumb. He really didn’t want to go to the emergency room and the size and depth of the avulsion injury appeared to be just shy of the requirements for emergency medical care.

Yunnan baiyao is “The white medicine from Yunnan province.”  This is a well-known anti-bleeding (“hemostatic”) treatment in Traditional Chinese Medicine CM that blends ingredients including various yam roots, ox gall bladder, pseudoginseng, sweet geranium, and more.  The precise recipe is a guarded secret in China but has been published online recently.

Yunnan Baiyao pills are rumored to have first come to the attention of the United States during the Vietnam War. American soldiers are said to have discovered Vietcong soldiers carrying small brown spherical pills of Chinese origin that when eaten allowed them to survive otherwise mortal gunshot wounds.

One of these “insurance pills” is still included with each package of the powdered and capsule versions of the medicine with instructions to take it in case of “severe traumatic injury.”

In the case of my neighbor’s thumb avulsion, the powdered formula was applied to sterile gauze which was then placed over the wound. I was not aware of this but evidently the application of this herb is quite painful, it really stings. Examining the wound the next day, I see a significant blood clot has formed and bleeding has stopped. Within two weeks, the wound is nearly 100% healed and pain free.

In this case, Yunnan Baiyao replaced a likely cauterization or stitches, both of which will result in permanent scarring and potential loss of nerve innervation to the tip of the thumb.

This TCM formula has many uses beyond staunching bleeding and has been studied well for its use in veterinary oncology.

Let’s hope it will be another 14 years before I need to pull out my trusty vial of Yunnan Baiyao, but there are a number of internal uses and veterinary applications that might bring it out of the first aid kit sooner than later.